A beautiful and huge car called "Yama"
A large number of men of "Ujiko" hauled
Gamagori is proud of walking between Hatsuken Shrine and Wakamiya Shrine
An unusual festival in Japan.

The annual festival of Yatsuguru Shrine and Wakamiya Shrine, the gods of production in Mitani, inherited from the Genroku era. In addition to performing votive dances in each of the six wards in the town for two days, on Sundays, half-naked clans who wore salashes dragged four gorgeous floats, paraded around the town, and then pulled into the sea. "Underwater delivery" is performed.

Four floats line up in front of Yatsuguru Shrine.
A large number of men pull the powerful floats, each with their own distinctive features, to the sea, in front of Wakamiya Shrine. 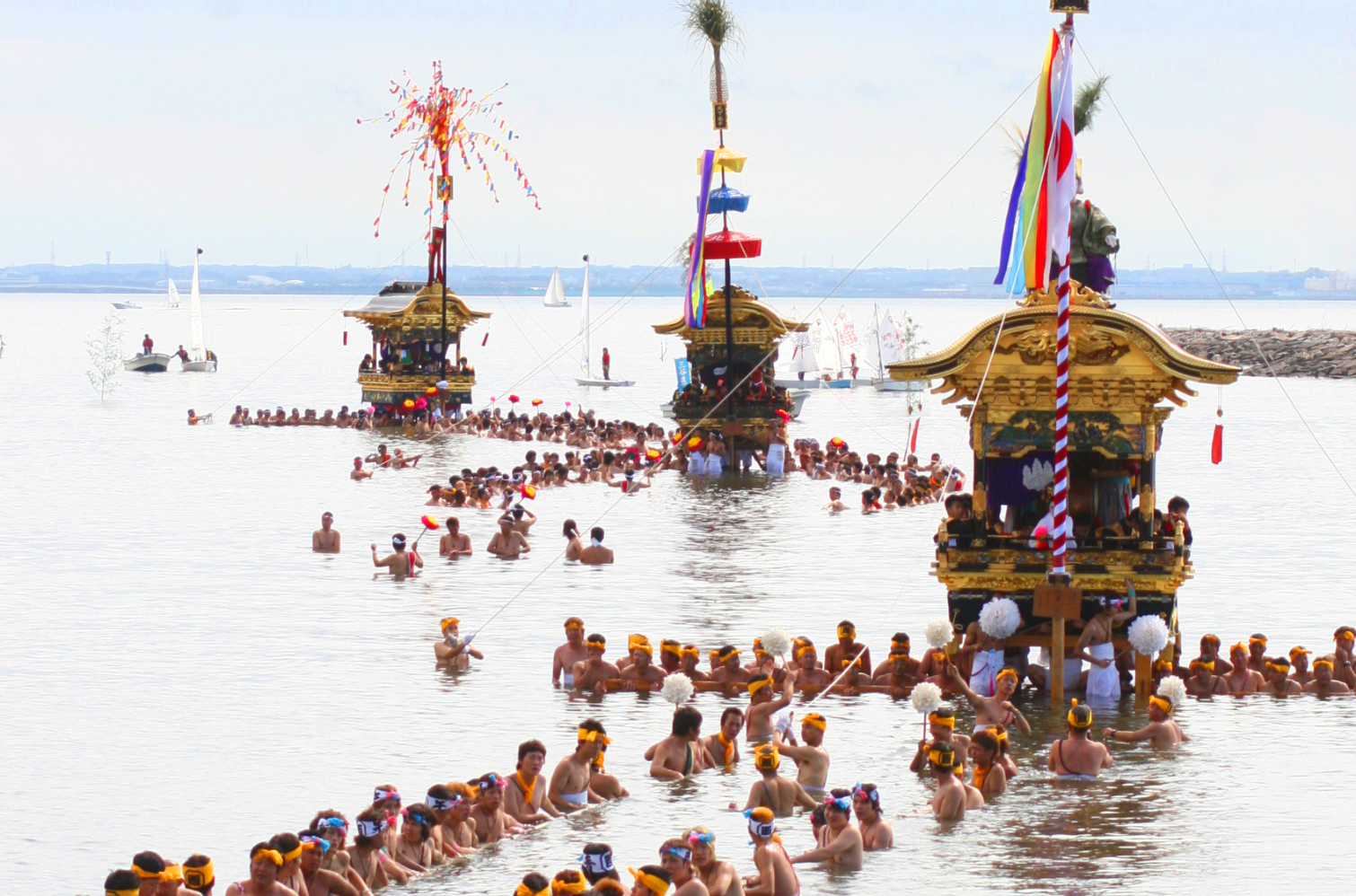 The biggest highlight "Water in the sea"

On Sundays, the "Undersea Pass" is held.
Four floats are pulled into the sea, and the shores of Mitani overflow with heat and energy, with the shouts and splashes of people. The spectacle of floats crossing the sea is so impressive that it is truly impressive.

The origin of the Mitani festival

One night in August of Genroku 9 (1696), about 300 years ago, Shoya “Sauchi Takeuchi” in Mitani had a mysterious dream. The dream is that "Yatsurugi Myojin, the birth god of this town, was transferred to Wakamiya Hachiman (Wakamiya Shrine) on the eastern side of the village."
Indeed, the message of God was to set up a mikoshi and immediately put on a shrine (September 9) at the festival of Shinko (Jinko / God of God). ) Was performed.
This is said to be the beginning of the Mitani Festival.

At the test festival (evening festival, now Saturday), Kamifuna Wakamiya Maru (Emperor Onin) of Higashi Ward goes to Yatsuguru Shrine, and goes to Japans Taketo (Yamatotari only thing) to greet him to come to Higashimiya to play. At the festival (main festival, currently Sunday), Takeshi Nihon, who was invited by Emperor Onin the day before, is willing to go to the customer. 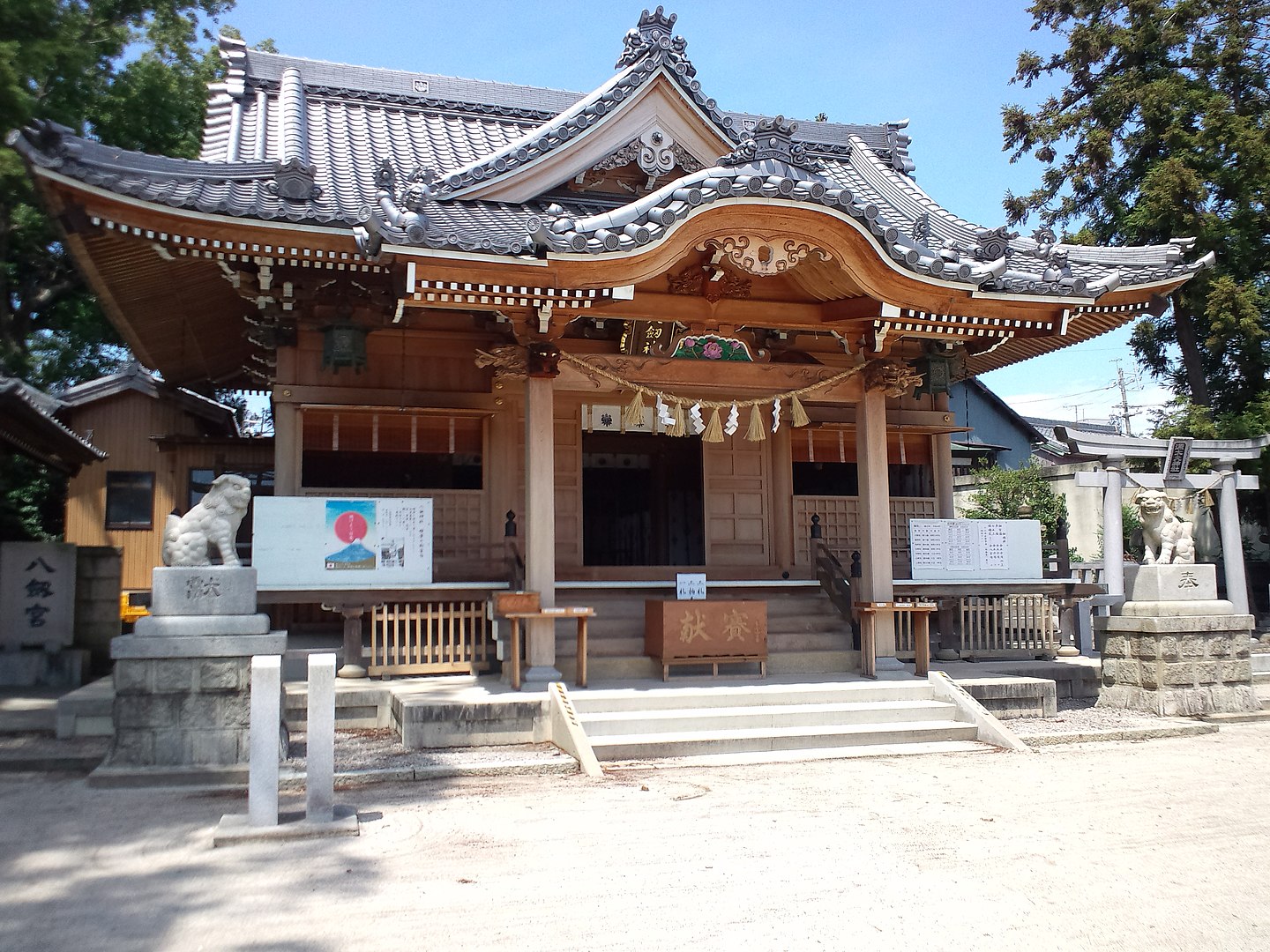 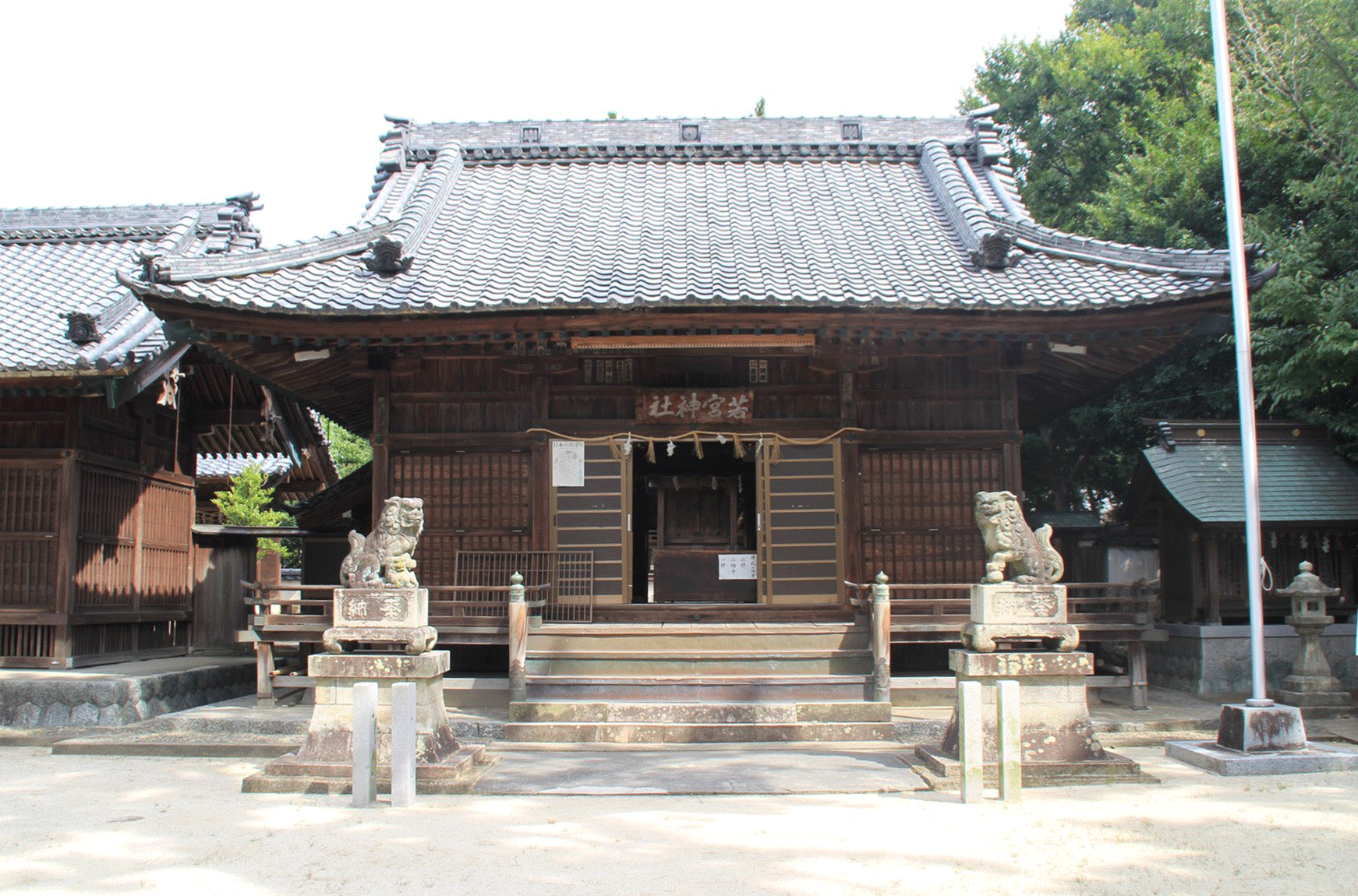 According to existing materials,
The oldest of the festivals, where shrines and shrines have inherited the priesthood of specific shrines for generations. Yatsuru Shrine is Takeuchi, and Wakamiya Shrine is Yamakawa. The thing was recorded in the 17th year of Masanori (1712), seeking a rally of all six wards in Shoya Matsubahama with Matsuhashima (currently Matsuku), the hometown of Sazaemon, as a Miyamoto, ).
After that, the festival grew with the development of the village, and each district competed to build a gorgeous and magnificent float, which was said to have been influenced by the Kyoto Gion Festival, and dragged it underwater to cross, and it was full of kagura and dance. I began to offer a lot of entertainment.
With this, the order of operation of the festival was established, and rituals were held under strict discipline. During the Bunka Bunsei period (around 1800), rituals of the same size as today were held. This is known from records and tools.
After that, it has been handed down as a celestial festival under the umbrella of the world, but the coastline was lost due to the coastal reclamation work caused by the typhoon of Isewan, and the traditional float of the sea was passed to the sea in 1955. Disappeared.
However, after that, in addition to the strong sense of survival of local residents, voices of revival of pulling of floats into the sea increased, and on the east coast of Wakamiya Shrine, one underwater trial was pulled in 1995, The 400th anniversary of the founding of the festival was started with four cars pulled back.
In March 1932, Gamagori City first designated four floats as tangible cultural properties, added a shrine in 1956, and designated a portable shrine in 1944. Also, "Mitani Festival" was designated as a designated intangible cultural asset.
At present, four floats are being drawn: Kamui-ku “Sword floats”, Naka-ku “Flower floats”, Kita-ku “Tripod umbrella floats”, and Nishi-ku “Ebisu floats”. Although newly built or completely renovated, each is a gorgeous luxury float carved with colored sculptures. 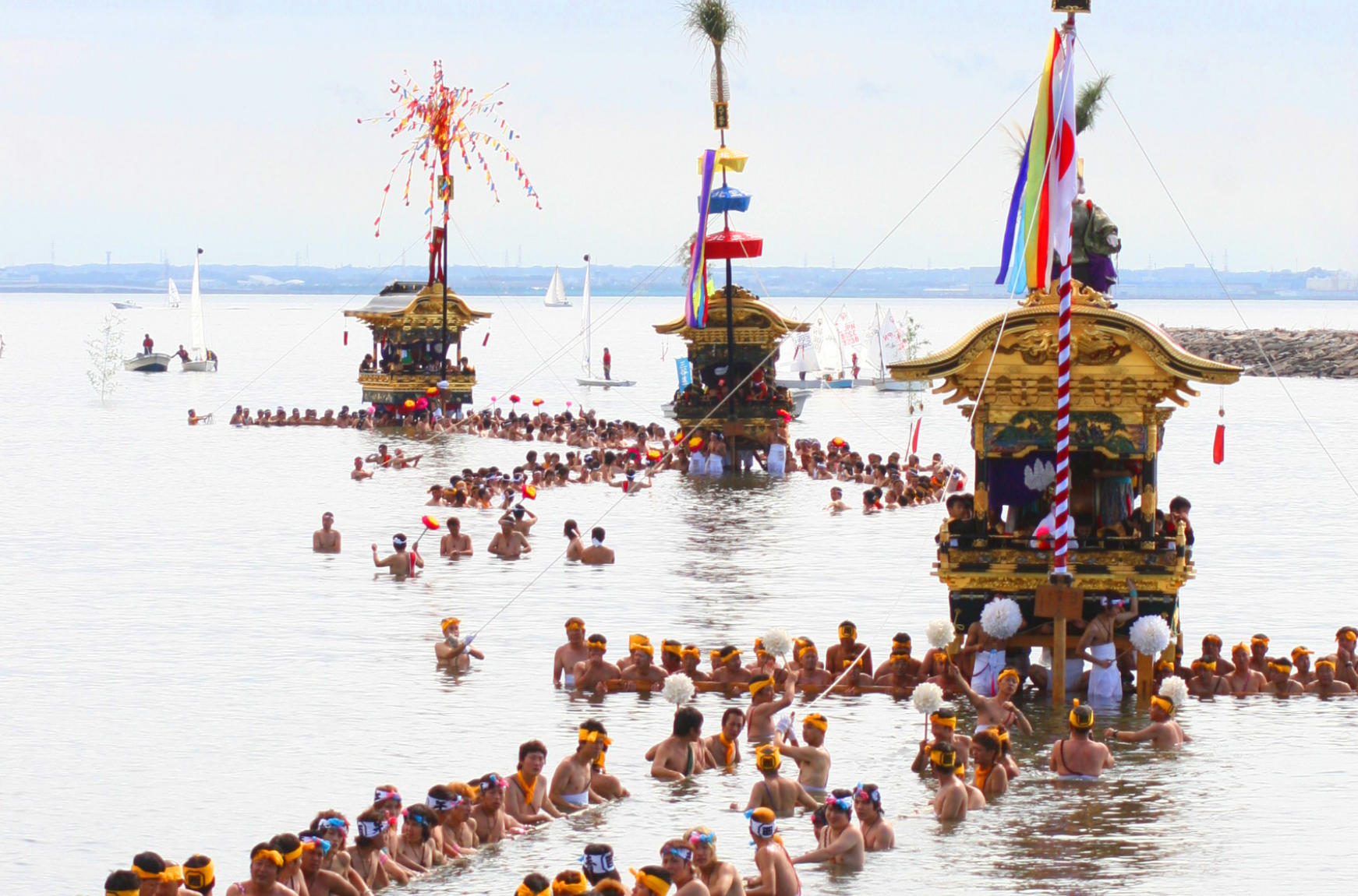 Undersea worship begins on Sunday at around 10:45 am on the shore of Mitani Onsen with a gun that informs you of the worship.
The order of crossing the sea is gorgeous (4), starting with the sword float in the upper ward, the float in Ebisu in the west ward, the float in the three umbrellas in the north ward, and the flower float in the middle ward. A float floats into the sea with a gun.
The floats, pulled by about 200 men, move quietly off the shallow offshore for about 400 meters and rise from the sea in about 15 minutes. 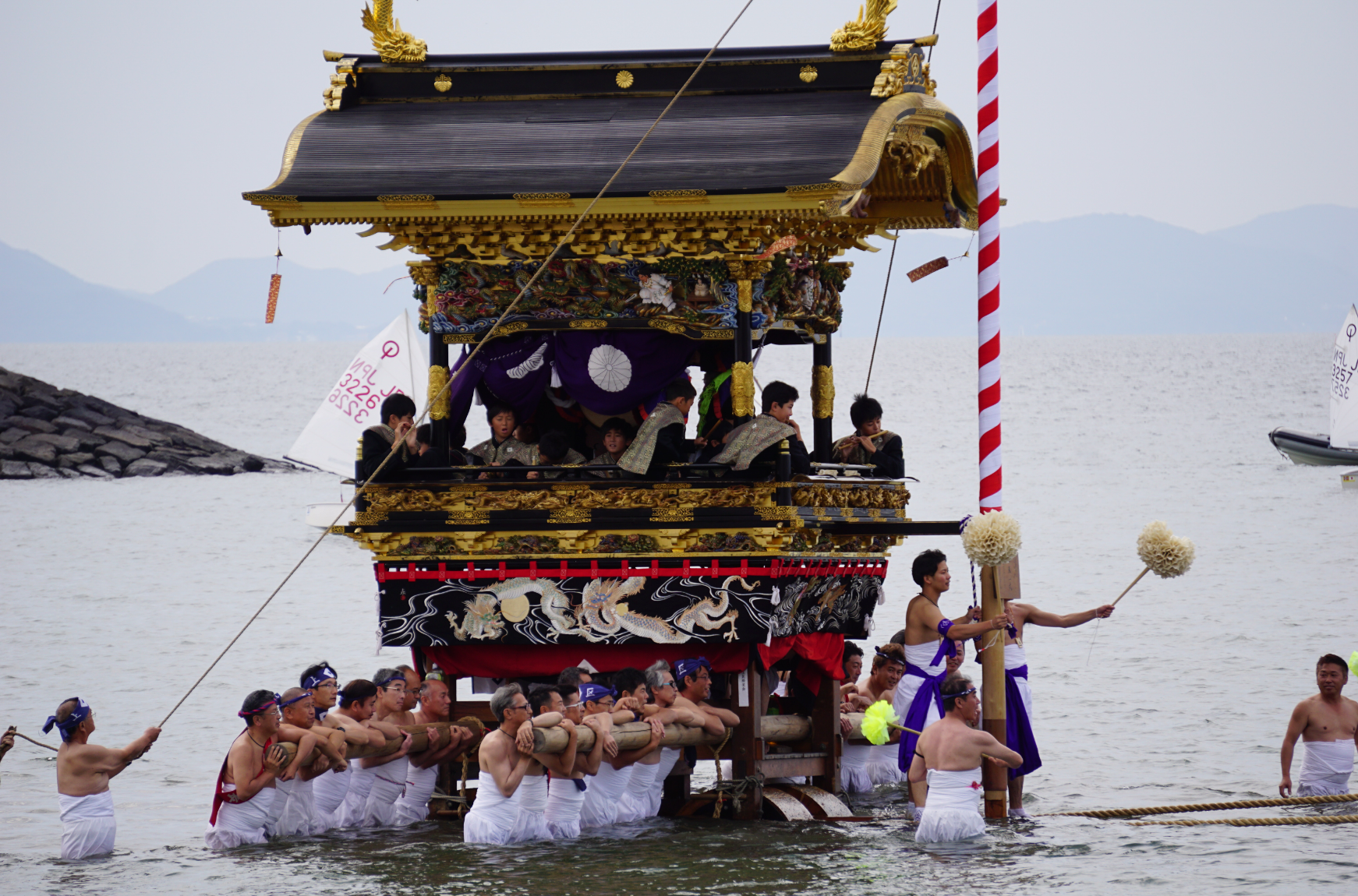 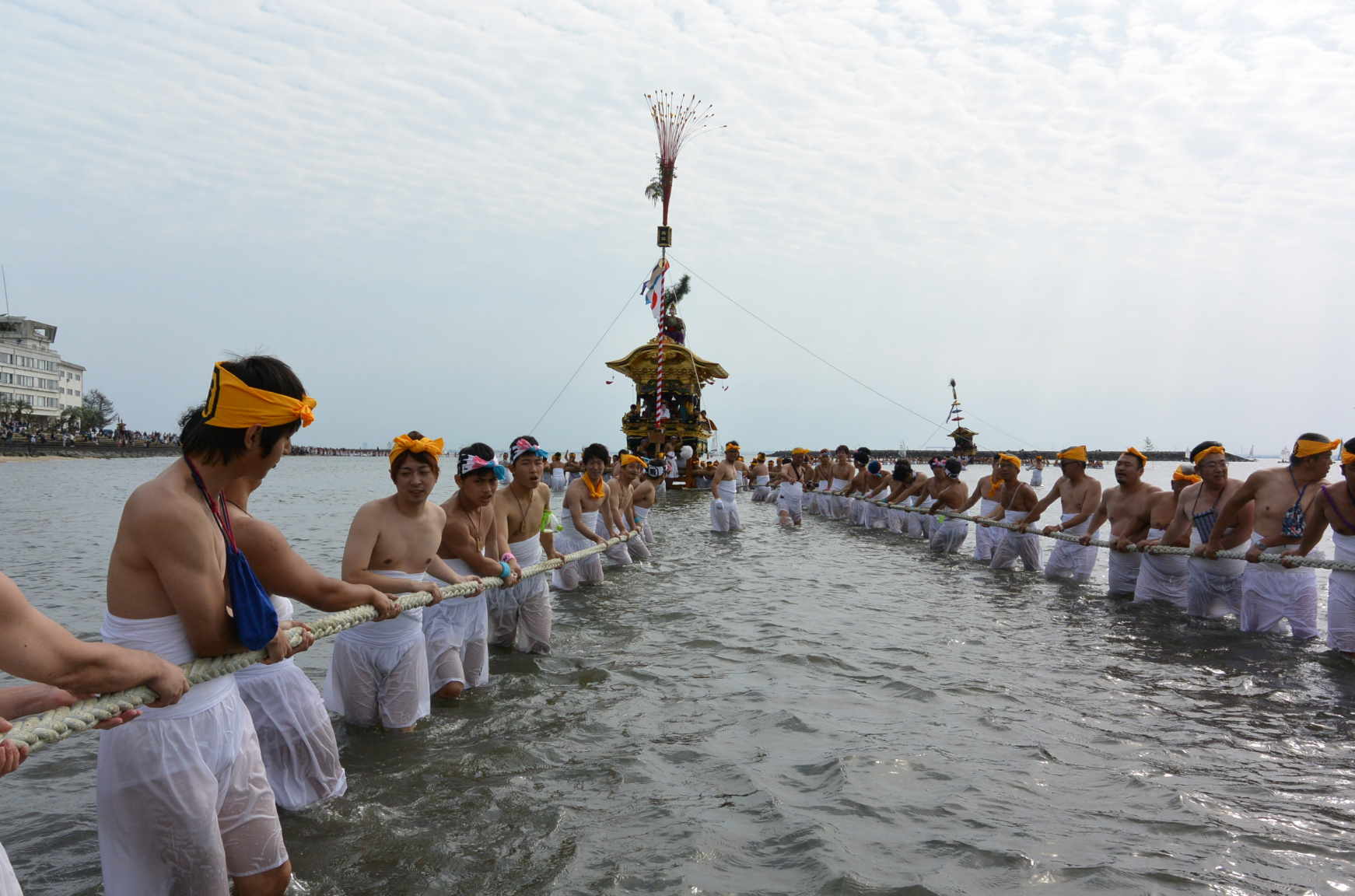