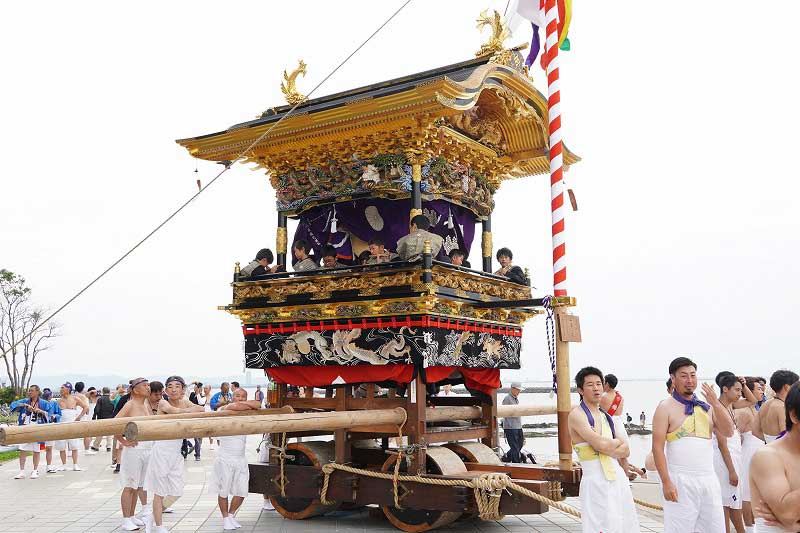 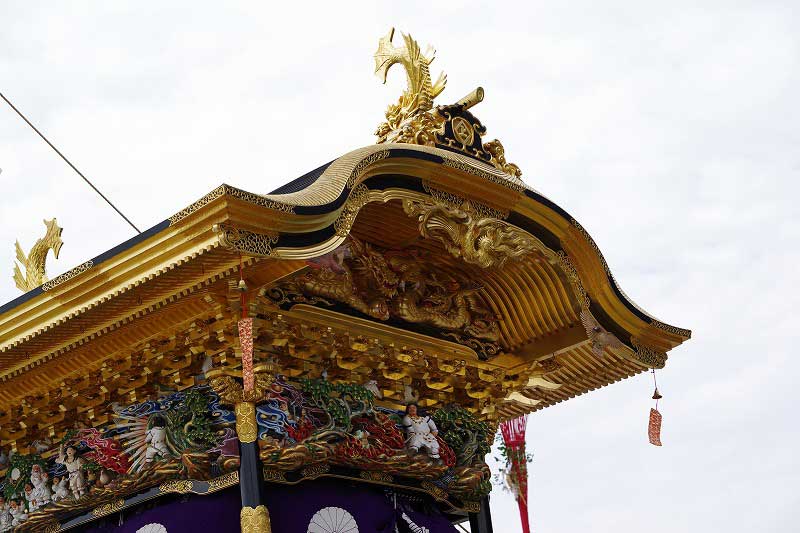 It is located east of Mikawa-Mitani Station and is called Kami-ku. The festive court has a long-standing votive dance, and a surviving daimyo line. The shrine in Kami Ward worships Susanomito at Tenpakujinja. In the Mitani festival and festivals, we offer the Yasuguri shrine patron of the god of birth. The organization that conducts the festival is called the Kami Ward Preservation Society, which was officially organized by Kami Ward in 1972. We can tell from the records and various tools that the festival of the Mitani festival was held almost during the Bunka Bunsei period. The floats were sword floats and were renewed in 1975. Gold leaf, colorful colors, metal fittings, etc. were applied in 1978, and the wheels were replaced between 2008 and 2009. 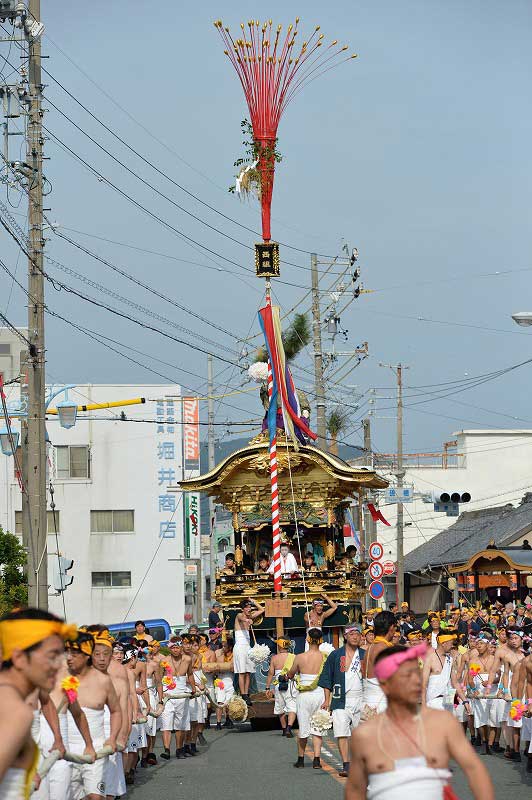 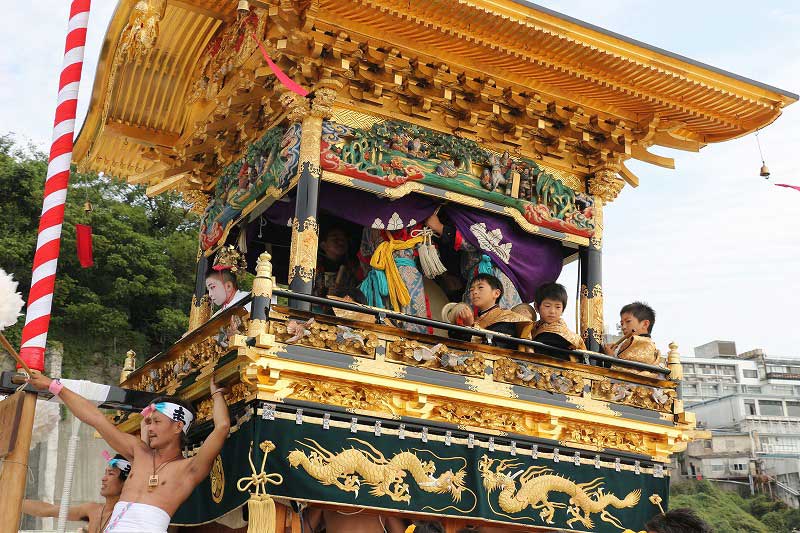 Nishi Ward is located at the west end of Mitani-cho, on the east side of the Nishida River. In the district, Shinmei Shrine, which is said to be a recommendation for the Hakuho year, is enshrined and is the deity of Nishi Ward. In other words, Nishi Ward is a double child of Yaguru Shrine and Shinmei Shrine. Shinmei Shrine is also referred to as Shinmei Shrine because it is said that a statue launched from the sea is worshiped.
Nishi Ward is also called "Nishi Araya", and is currently one of the six wards of Mitani-cho, which counts more than nine hundred and ninety units. Mitani Festival and Shinmei Shrine are closely related. The lion head of Shinmei Shrine (called "Inkyou Kagura", which is a cultural property designated by the city and estimated to be of the Muromachi era), stayed at Yatsuguru Shrine for a trial music, and the Wakamiya festival was held the next day. This is because they will be transferred to the shrine with the portable shrine. It was also said that the festival would not begin unless "Inkyo Kagura" in Nishi Ward came.
This preservation society is in charge of the whole Nishi Ward Neri (local arts) section and the festival proceeding section dedicated to the shrine at the Mitani festival, but this role will change from the Edo period, which is said to have become the form of today’s Mitani festival It has been reached without it. It is not clear, but I heard that the festival was attended by Matsuku Ward, mainly Yatsuguru Shrine in Kami Ward, Shinmei Shrine in Nishi Ward, and Wakamiya Shrine in Higashi Ward, followed by Kita Ward and Naka Ward. Musical accompaniments and dances are unknown at any time, but I think at least when the floats were built. 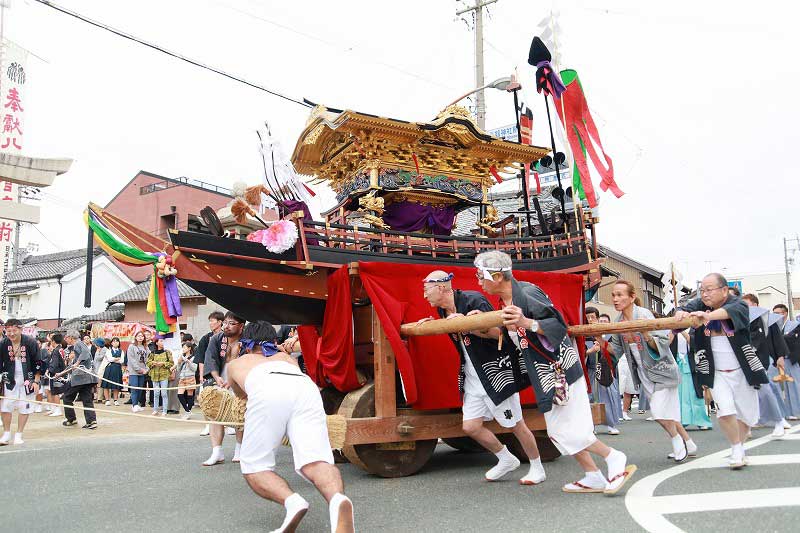 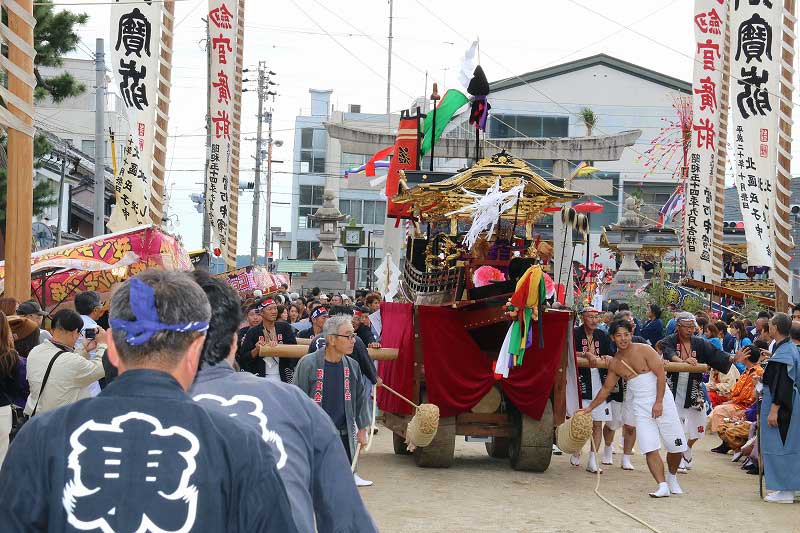 The highlight of Higashi Ward is in the draw. In front of Kamifune Wakamiya Maru, young people hold hands and knead them in accordance with Matsumae Kiseki’s leading. “Farewell to Wakamiya-sama. I’m going to get in safely. Everyone throws hand flowers and shouts Wakamiya-maru energetically. 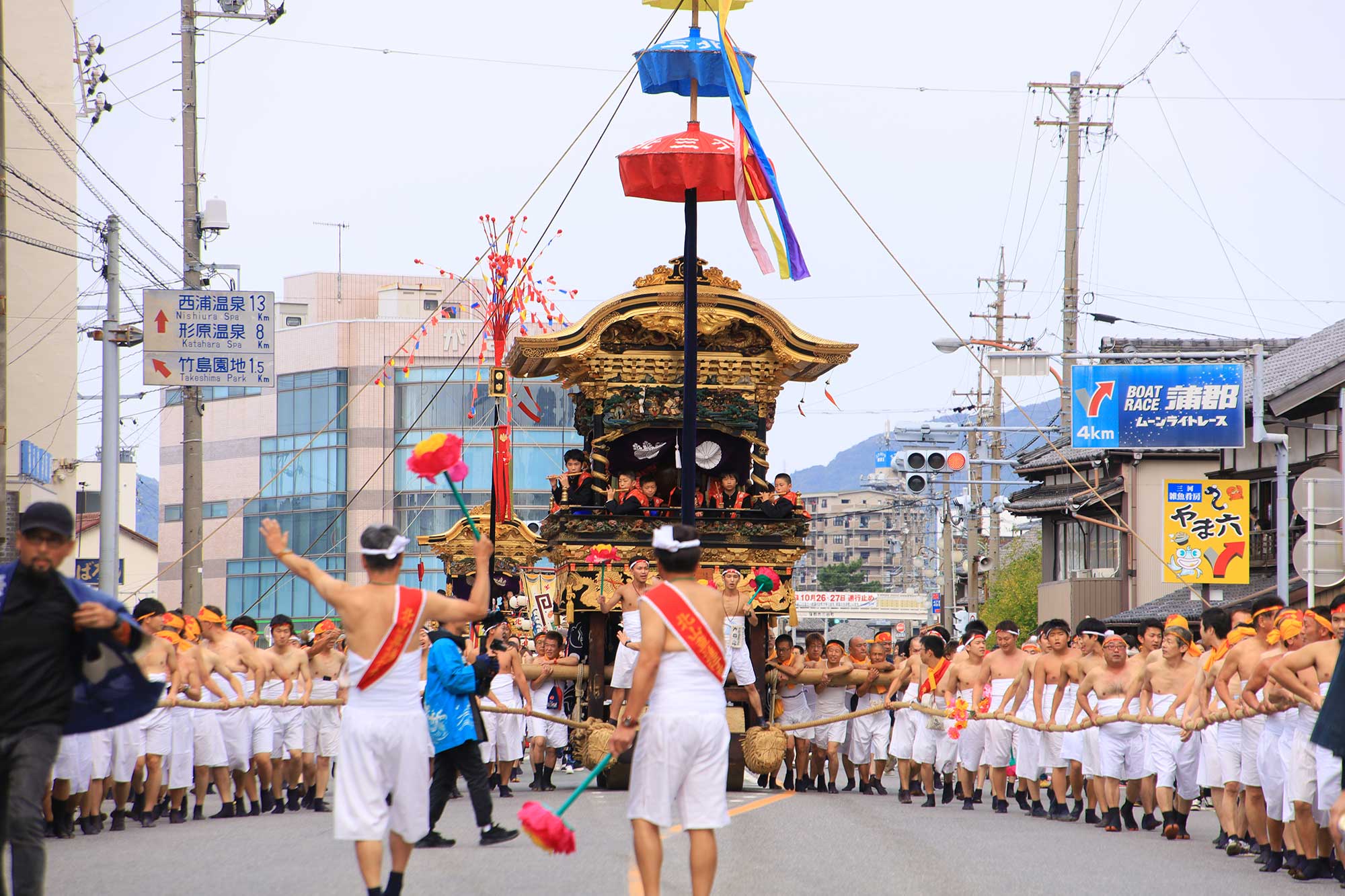 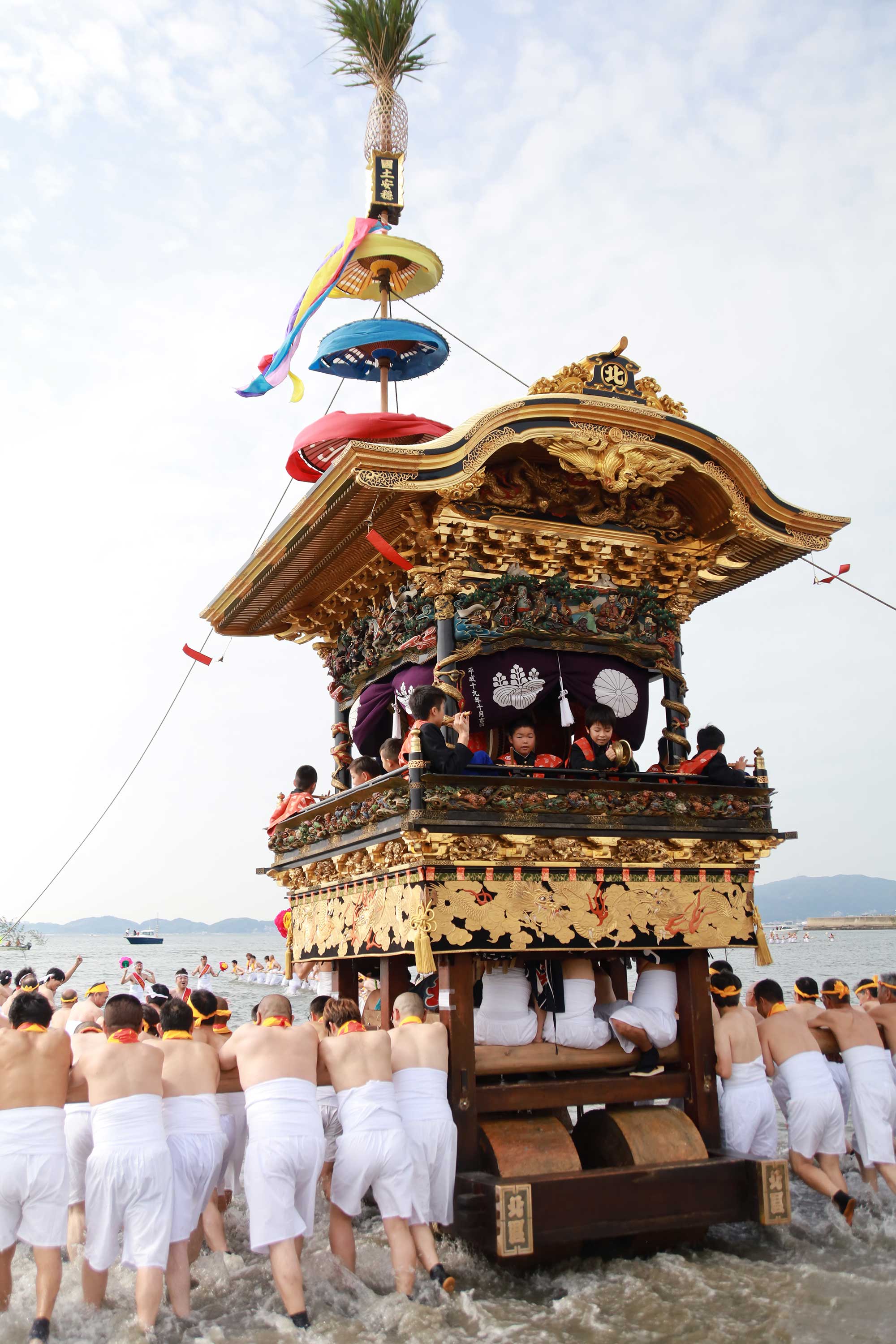 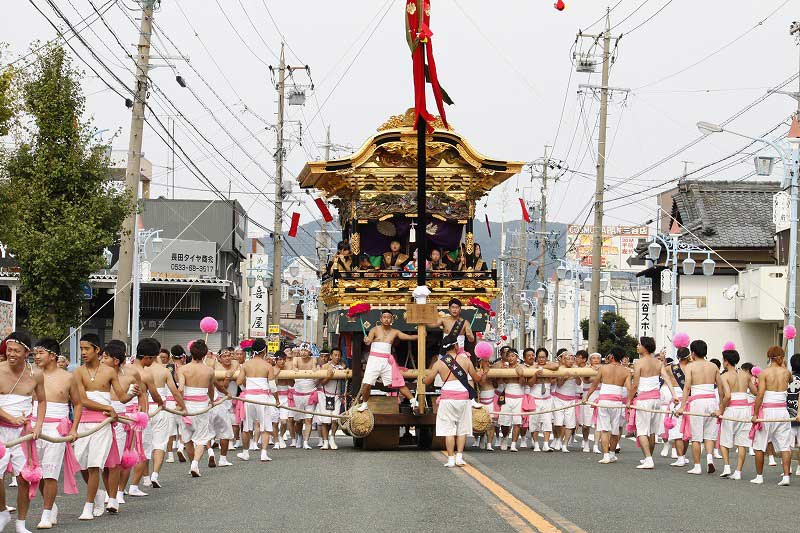 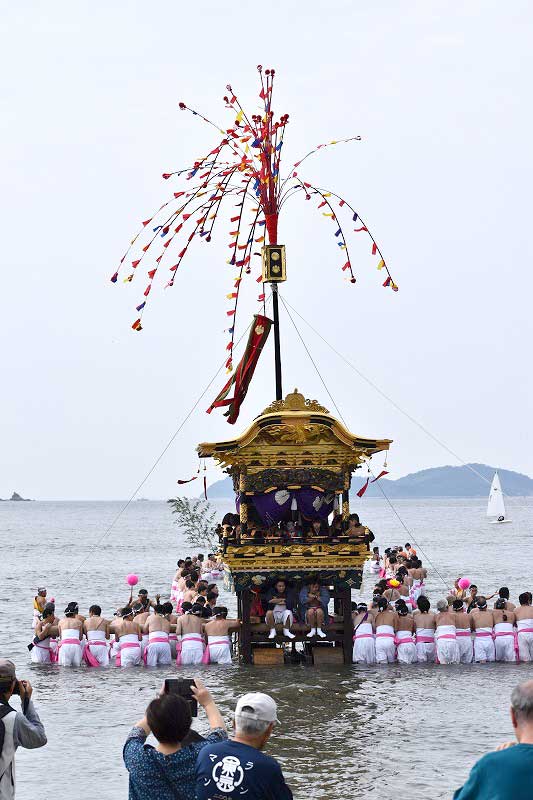 During the Edo period, it was Nakahamajima, from the Meiji era to the early Showa era, Nakahama Ward, and now it is Naka Ward, but many people still call it Nakahama. The character of the coat is also "Nakahama-ku"!
The area is not surrounded by other wards and cannot be spread. The number of outflows to other areas increases, vacant houses and parking lots stand out, and the decline in population cannot be stopped. Changes in the form and operation of the festival due to a shortage of staff are ongoing issues for consideration.
However, the spirit of the past, when the number of households and the population were the first by far in 6 wards, has been inherited and is still alive. 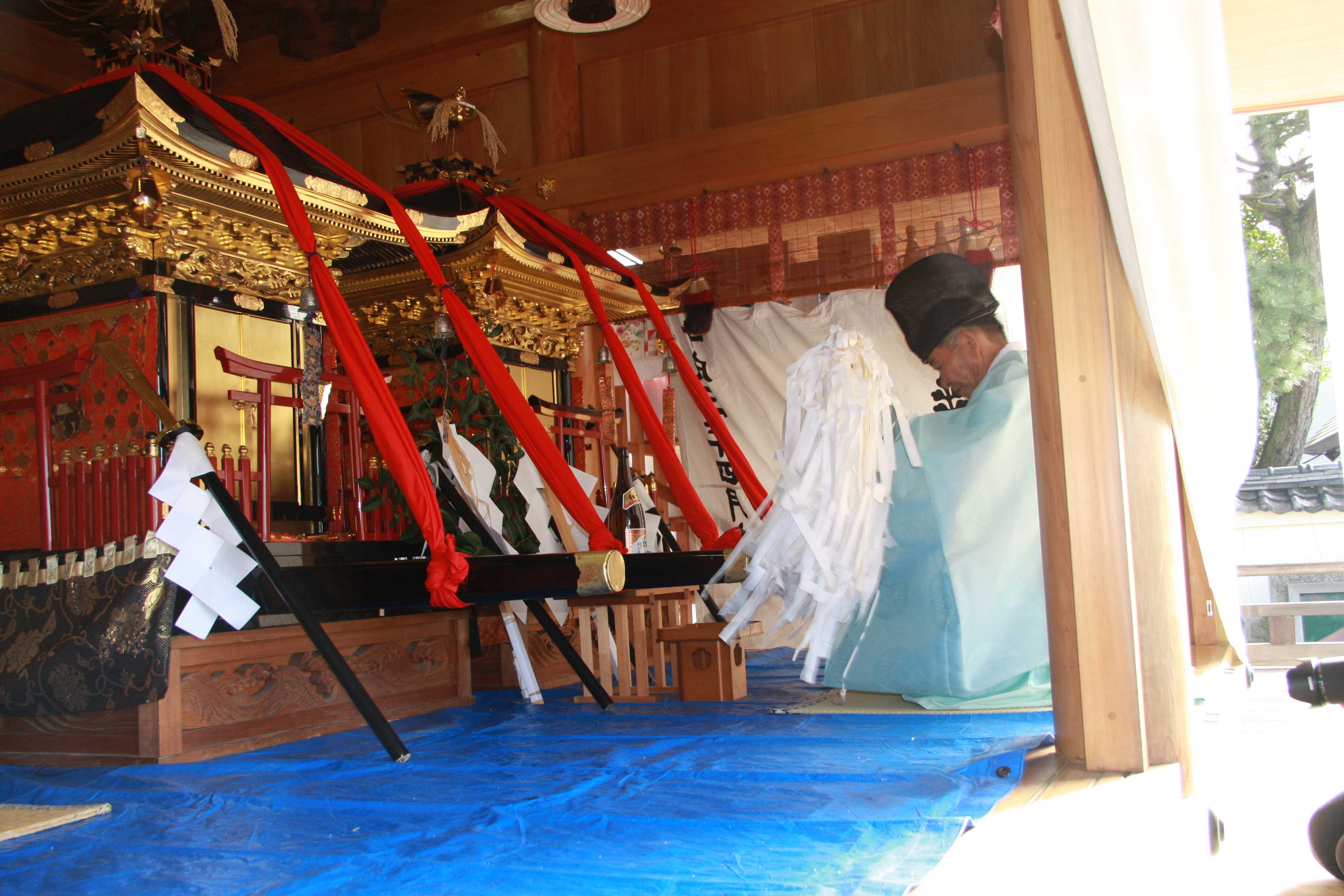 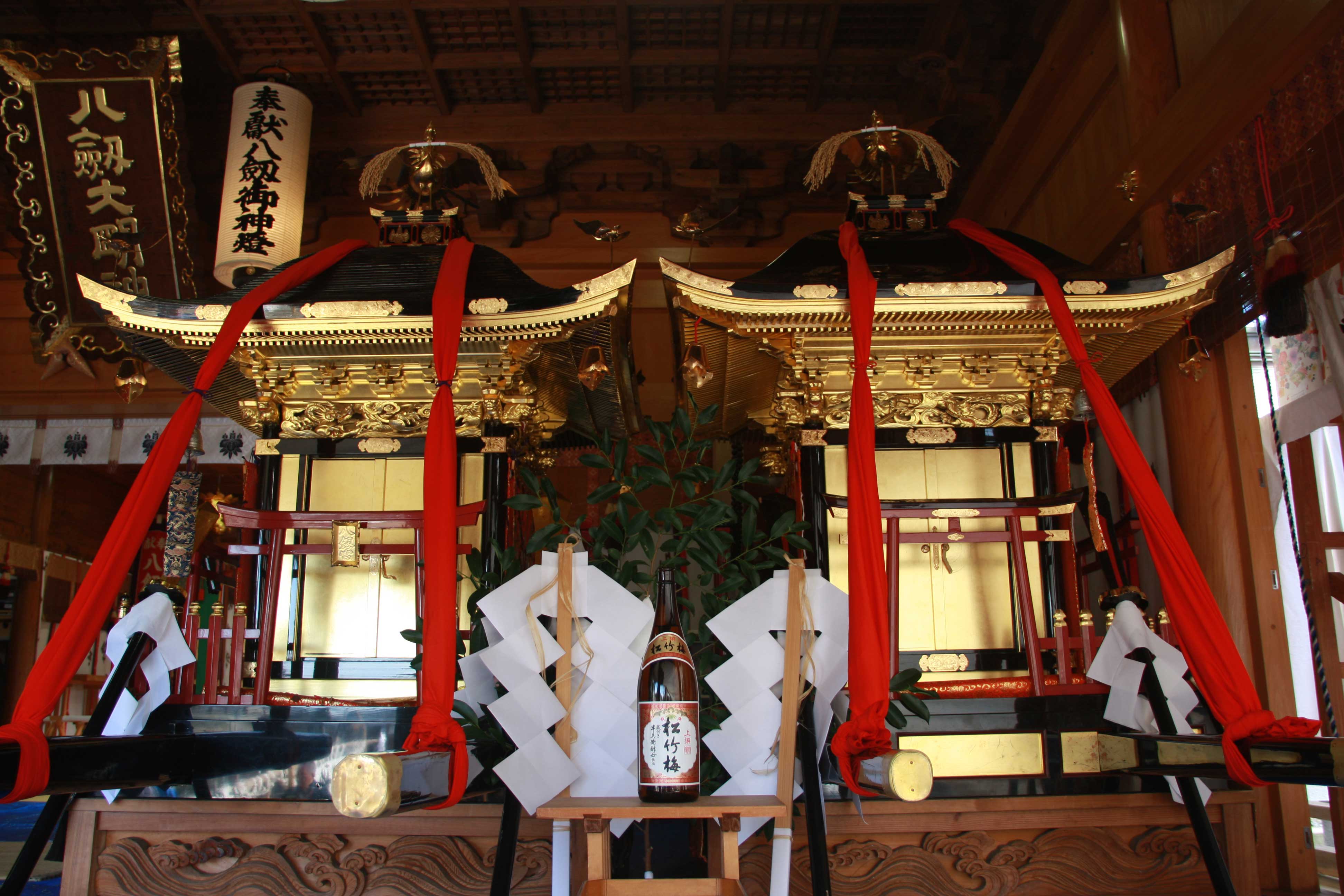 Matsu Ward was long known as Matsuba Ward. There is a theory that Matsuba was converted from Matiba (machiba). At the eastern side of the inkstone river, there is a house for the mother-in-law of the Karanagikai at the current fire zone building, and they always came in and out, and the sounds of drums and shamisen were always there, creating the atmosphere of the town hall. Was from.
From the end of Taisho era to the early Showa period, Matsu Ward had a dense pine forest coastline from the bottom of Mitani Onsen across National Highway No. 23 to the eastern edge of the fire protection building in two north and south zones. The shoreline was just white sandy beaches, and was not in a suitable area for unloading. There are villas lined up here and there in the pine forest, and bamboo laver soda is planted in the sea.